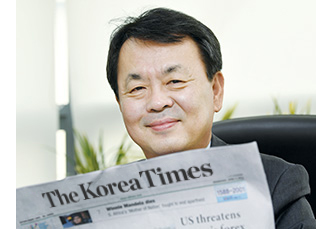 The Korea Times has set many records in Korean journalism.

It is the longest-serving English-language daily in the nation, publishing its first edition on Nov. 1, 1950, four months after the outbreak of the Korean War.

In 2015, it became the nation's first English-language daily to publish its 20,000th edition.

It is also the first independent English-language daily in Korea, a mass publication not affiliated with the government.

It is the first English-language daily to represent the voices of global citizens, to adhere to industry standards and practices and to be completely impartial - to be neither conservative nor liberal.

It is the first daily to introduce informed opinion pieces through its daily column, "Thoughts of the Times," in 1964. The column provides a platform for citizens in Korea and worldwide to contribute articles about a wide range of topics, as long as they are in line with the daily's ethical standards.

It is the first daily to recognize and promote Korean literature throughout the world, introducing the Modern Literature Translation Awards in 1970.

It is also the first English-language daily to recognize the importance of newspapers in English language education, by introducing the English Newspaper in Education (ENIE) guide for both teachers and students. The sixteen-page guide to current English-language news aims to help Koreans easily learn English.

Finally, it publishes 20 or so pages of news and editorials daily for readers nationwide and worldwide. The Korea Times never sleeps, providing news around the clock through its website, www.koreatimes.co.kr.

Although it is the oldest English-language daily in Korea, it remains dynamic and up-to-date by encouraging reporters and editors to write fresh stories that appeal to a broad range of readers here and abroad.

As in the past, The Korea Times will go through good times and bad with the readers, serving as a beacon of truth and a bridge between Korea and the world.

As the newspaper's CEO and publisher, it is my duty to ensure that The Korea Times does not rest on its laurels despite its many achievements.

There are no words to express how much I value the readers' feedback to our articles over the years. I believe your feedback helps us improve the newspaper, and I welcome any constructive criticisms and suggestions. Feel free to contact me at belee@koreatimes.co.kr.
My door is always open.